A capacity crowd raised the roof from the first bell to the last when BOXING CONNECTED returned to Nottingham‘s Harvey Hadden Stadium last weekend.

Promoter Scott Calow said he was blown away not only by the fans’ support for NOTTINGHAM CALLING on Saturday 8 March but also by the quality of boxing with which they were presented.

With 11 bouts on the card, the evening got off to a flying start with a local derby between Tim Ventrella and Joshua Chapman. The fight of the night, this was definitely not for the faint-hearted, a real war which ended in a draw. 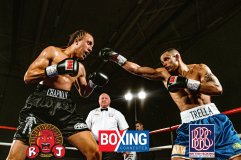 Next up was Conner Short who retained his unbeaten record when he overcame the rough tactics of his experienced opponent Michael Horabin from Cheshire. 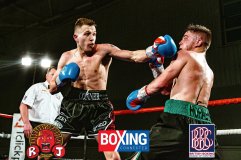 In the third, Delmar Thomas breezed by Stockport hardman Jamie Quinn and now prepares to box for the Midlands title on Saturday 28 March. 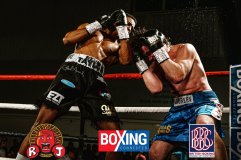 Making his pro debut, former amateur star Ezra Taylor put on an impressive display of skills and power, knocking down his Latvian opponent Jevgnijis Andrejevs three times before stopping him. 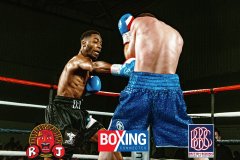 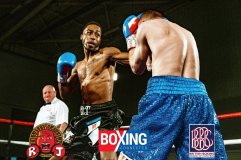 In the biggest upset of the night, Bolton’s Chris Jenkinson was awarded the decision over Kyle Hughes after a hard fought fight which the majority of the crowd thought the Nottinghamshire boxer was unfortunate not to have won.

Making his return to Nottingham after an eight-month break, Derby’s Sajid Abid treated the crowd to a boxing master class to defeat his Sheffield-based opponent Qasim Hussain. 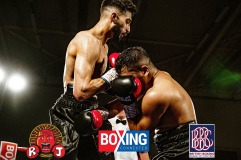 In the trickiest night of his short professional career, Joe Hughes was up against Swindon’s Joe Beeden who came to survive and spoil. Sticking to his boxing, the Nottinghamshire fighter showed maturity to take the win and will now be back in the ring again on Saturday 4 April.

In another tough battle, Ryan Amos took his best scalp to date when he defeated the experienced and on form Nathan Hardy from Sheffield. 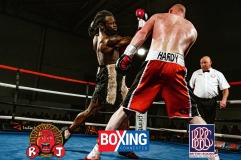 Then it was Jack Hutsby‘s turn, putting on the best performance of his pro career so far to beat Gloucester’s Lewis van Poetsch and keeping his promise to donate his whole purse to a friend with cancer. 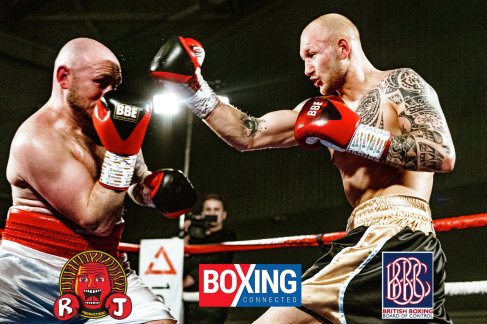 The penultimate fight of the night was another pro debut, this time for Dominic Shepherd whose army of supporters saw him take the win over Genaoijc Krajeski from Liverpool.

Expectations were running high for the main event of the night, which featured Nathan Kirk in his last fight in Nottingham. Walking out to a huge reception, Nathan brought the evening to a close with a victory over a tough opponent, Edwin Tellez from Spain, and now his team is looking for a big fight for him before the summer.

“We’re getting used to a good turnout for shows here at Harvey Hadden and to cards stacked with local talent but this one exceeded our expectations in every respect,” said Scott. “A big thank you to everyone,  whether in the ring, back stage or in the arena, without whom nights like these wouldn’t be possible.

“Now our attention turns to the next one, when BOXING CONNECTED will be bringing more top class action to Nottinghamshire for BAD NEWS AND COMPANY at the North Notts Arena in Worksop on Saturday 4 April.”

One thought on “Nottingham show takes it to the next level”